Copy the following HTML iframe code to your website: 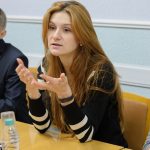 Maria Butina is the Russian agent of influence and secret spy who infiltrated the NRA. She is the one who first asked Trump about sanctions in July 2015 only weeks after he announced his candidacy–Trump called on her FIRST at the press conference. A few months later in Dec 2015, Butina arranged a free trip to Russia for Senior NRA members. The trip was paid for by the fake Russian group “Right to Bear Arms”. We know from court transcripts available that at that time Butina emailed a message that said let the NRA members celebrate, we’ll put pressure on them later. Russia then funneled $30 million of Russian money through the NRA for Trump ads. It is unclear at this time if the NRA was complicit, or a willing idiot. Most believe they were just a willing idiot. On Dec 11, 2018, Butina plead guilty to conspiracy, acted as a Russian agent to build an influence campaign inside the U.S.–collude with Americans. She is also the first Russian national to agree to cooperate with Mueller.

Dec 13: Maria Butina Plead Guilty, Agreed to Cooperate, Not Mueller, but US Attorney

We learned from court transcripts this day that from 2015-2018 Butina worked as a Russian Secret Spy and conspired with others to attack America running covert operations lead by the Kremlin. We know from other court documents and reporting that Maria Butina conspired with Americans including Republican politicians and the NRA to attack America.

In the court documents we also learned that Republican activist Paul Erickson received a target letter and the government is looking at charging him as a co-Russian spy!

Mar 2015 both agreed to conspire with the Russian government. Their covert operations would be directed by their handler Torshin for the Kremlin to affect politics in America.

In August 2016 Erickson setup a “very” secure back channel between Republican leaders to the Kremlin and directly to Putin using the NRA. This was setup using their handler Torshin.