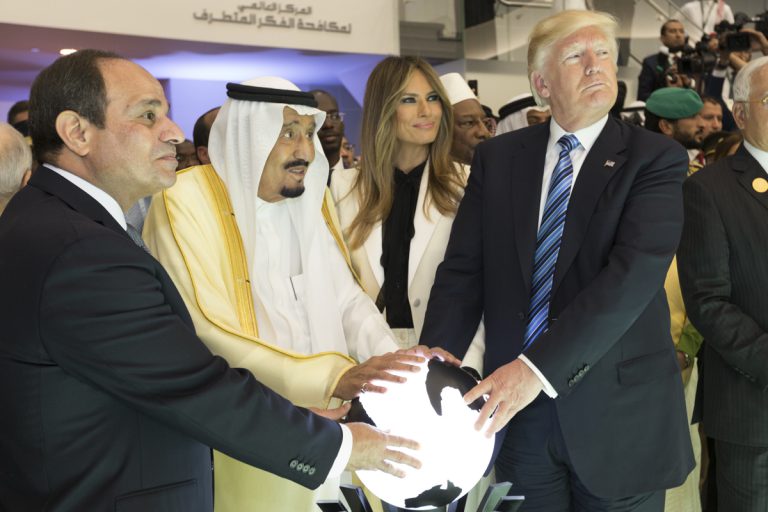 THE SWAMP IS THICK UNDER TRUMP

Trump’s ties to Saudi Arabia run deeper than he says. Trump’s love for Saudi Arabia seems at odds with how Trump treats other Arab countries. Trump says he has no financial interests in Saudi Arabia, but the contrary evidence is overwhelming. There are strong reasons why the founding fathers put the foreign emoluments clause in Article I of the U.S. Constitution. The fact that Trump has not been able to separate himself from his business is a really big deal. To my knowledge, this is the first president in our history that is benefiting so financially directly from the presidency.

Trump ignored the CIA report concluding that Saudi crown Prince MBS ordered the killing of journalist Khashoggi. After the report, Trump released a statement literally saying “maybe he did and maybe he didn’t!” A president has never done that before.

Why? What ties does Trump have to Saudi Arabia?

In 2018, revenue at the Trump hotel on the West Side of Manhattan had increased after two straight years of revenue drops. The general manager informed investors that revenue in the first quarter of 2018 jumped due in part to “a last-minute visit to New York by the Crown Prince of Saudi Arabia”.Also, in 2018 a document issued to investors read, “Saudi-based customers had booked 218 nights at Trump Chicago this year — a 169 percent increase from the same period in 2016.”

In August 2015, Trump said, “Saudi Arabia, I get along with all of them. They buy apartments from me. They spend $40 million, $50 million. Am I supposed to dislike them? I like them very much.” He later said, “I make a lot of money from them. They buy all sorts of my stuff. All kinds of toys from Trump. They pay me millions and hundred of millions.”

Also during the campaign, Trump was exploring plans to build a hotel in Jiddah, Saudi Arabia. In all fairness to Trump, he abandoned this project likely because he became president. When Trump says he gave up lots of deals to become president, this might be one of those deals.

In June 2001, the Saudi government bought the entire 45th floor in Trump World Tower for $4.5 million. The biggest purchase in the building to that date. In 2008, the apartments were converted into part of the Saudi Mission to the UN.

In the mid 1990s, a Saudi prince bought a stake in Trump’s Plaza Hotel by agreeing to pay off some of Trump’s debts on the property.

In 1991, Trump was in financial trouble to the tune of $900 million and needed a bail out. His yacht named “Trump Princess,” was repossessed, and sold to Saudi Prince Alwaleed bin Talal for $20 million. The yacht was originally named Nabila and was built for Jamal Khashoggi’s cousin Adnan Khashoggi, a Saudi arms dealer. Trump bought it from the Sultan of Brunei.

Also, I think it’s a bad idea to have an ethically-challenged businessman as president. Saudi royalty including MBS is who the Trump’s and Kushner’s like and do “personal” business with for decades. Trump is LITERALLY ignoring information from our intelligence agencies and using our government to help protect MBS! Everyone who can think straight knows this. America is the laughing stock of the world. Our stock as a country has plummeted. Other countries are rising. We are losing.

Even Fox News fact checked Trump documenting some of his many ties to one of his biggest customers.