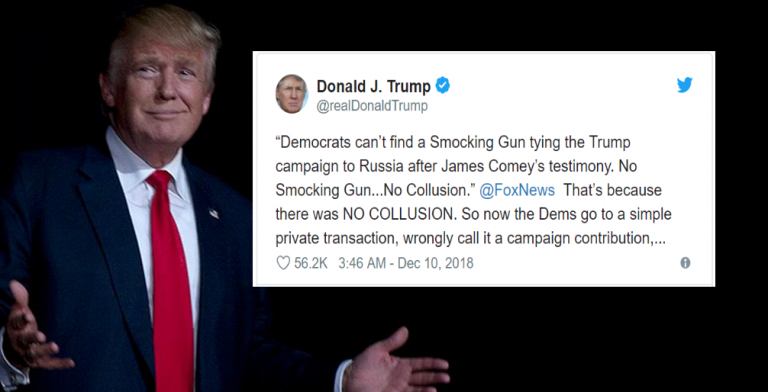 Today, Trump tweeted another brainwashing meme for hosts on the right to echo. After watching Fox & Friends, he tweeted based off of what he saw. Today’s tweet is a good example of the Trump-be-crazy obfuscation strategy. In this single tweet, he started and conflated 4 things giving Trump supporters something to pivot to when confronted with facts from Earth 1. 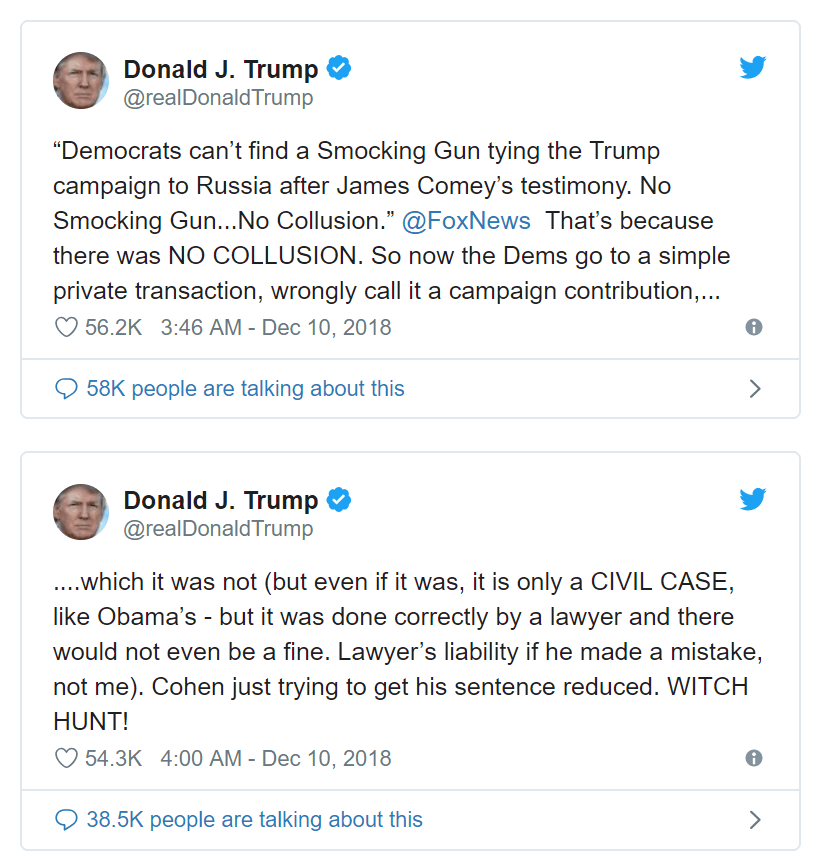 First, I believe Trump chose to use “smoking gun” with this Russia Election Conspiracy tweet because the Khashoggi problem is heating up right now and Lindsey Graham said, “There is not a smoking gun, there’s a smoking saw.”

Also, CNN released a transcript of Khashoggi’s last moments indicating Khashoggi was clearly cut up alive and murdered by the government of Saudi Arabia. The president of the U.S. is helping a criminal government cover up the killing of a journalist for the Washington Post living in Virginia with 3 American kids.

From CNN, here is the last moments of Khashoggi’s life during the course of the gruesome scene of 15 men cutting up Khashoggi…

Khashoggi enters and recognizes someone who should not be there and says, “What are you doing here.”

“You are coming back” says Maher Abdulaziz Mutreb, one of MBS’s intelligence officials.

“You can’t do that, people are waiting outside” replies Khashoggi.

Several of the 15 rush Khashoggi.

Khashoggi screams as they are sawing and cutting up Khashoggi. Two more screams from Khashoggi, then a gasp.

Tubaiqi the forensic doctor says, “Put your earphones in, or listen to music like me.”

The transcript notes the sounds of Khashoggi’s body being dismembered by a saw, as the alleged perpetrators are advised to listen to music to block out the sound.

And, according to the source, a series of phone calls are made to senior MBS figures.

The “after James Comey testimony” is for those hard core logic partisans. Technically this meme is kind of correct. Meaning,  if you limit the scope of your consideration to the recent testimony by Comey, then perhaps this meme is technically true. But Trump conflates that thought with “…there was NO COLLUSION.” We know this is a lie right now.

We know Trump participated in two separate criminal conspiracies (aka collusion, synergy) that contributed to his winning the Presidency:

2. Russia Election Conspiracy  — This criminal conspiracy was run by the Russian government, the GRU, we now know from Cohen’s plea deal that Trump directed Cohen to participate. We know Cohen started communication for Trump with Russia in November 2015. We know Trump would receive hundreds of millions of dollars if the sanctions were lifted off of Russia. We know Trump continued talking with Russia well into his presidency at the same time he was telling voters he had nothing to do with Russia and he separated from his business.

We know at least 16 people from Trump’s campaign were in contact with Russia during the campaign. The usual number is zero. Trump has been leveraged by Russia for the last two years! Even if voters didn’t know, Russia did. Is this why Trump insisted on meeting privately with Putin? Think about that, the president of the U.S. was compromised by Russia.

When Trump makes decisions regarding Russia, most of us are questioning why? Was it because of Russia? Is Russia making him do that? I never had that thought under Obama. Did you?

Why do Trump supporters believe obviously false tweets like today’s tweet from Trump? Because Trump, Fox News, and the right are engaged in an “appeal to authority” conspiracy. People don’t have time to research what is really going on, and they believe Trump, nor Fox News would lie to them. This is one of the most common logical fallacies. If you don’t wish to research arguments behind conclusions you need to make sure you only listen to good authorities. Right now, the Trump administration, Fox News, and hosts on the right are known bad authorities. Meaning, we know they lie and are wrong on facts regularly.