Biography: Alice Pemberton at St Albans, Hertfordshire, England. She was the mother of Roger Williams of Providence, Rhode Island.

The will of Margery Pate mentions the complete family unit of James Williams and Alice Pemberton. This confirmation of their family unit further establishes relationships and locations. The fact that she left 20 shillings to each member of the family strongly indicates Margery Pate was a close family friend.

Roger Pemberton of St. Alban’s Esq. 13 November 1624, proved 5 December 1627. To be buried in the parish church of St. Mary Bow, London. Provides for an almshouse for six poor widows, having purchased,
for that purpose, a close “or meadow or pasture in Bowgate in the parish of St. Peters, in the town of St. Alban’s, in mine own and my son Ralphe’s name. My three sons John, Robert and Ralphe and ray son Wolley and their heirs shall have the placing and displacing of the same widows in the several rooms, they to be above three score years of age and of good honest life and behavior and of civil carriage, two to be of St. Peters two of St. Stephens one of St. Michael and one of Sheuley. To my son in law Robert Wolley one signet of pure and fine gold of the value of five pounds, with my arms to be engraven thereupon. To my friend and brother in law M””. Francis Kempe one signet of pure and fine gold, to be of the value of five marks, with my arms to be engraven thereupon. To my brothers in law Nicholas Cotchett and Jeremy Odell, to either of them, one hoop ring of gold, of the value of twenty shillings apiece, with this poesie (not the gift but the giver) to be engraven thereon. To my wife and my daughter Tecla Wolley, to each of them a hoop ring &C; with this poesie (my love to you). To each of my daughters in law Katherine Pemberton, Susan Pemberton and Frances Pemberton one hoop ring, with this poesie (keep the gold^jn mean).
Item I give and bequeath unto my cosen and Godsonne Roger Williams the some of ten pounds of lawfull english money. To my two godsons Ralph Cotchett and Roger Odell twenty shillings apiece. To each of my grandchildren Ellen Wolley and the three Elizabeth Pembertous one hoop ring of pure gold, of the value of thirty shillings apiece, with this poesie to be engraven therein (feare God). My wife and my son Ralph to be executors.
A codicil to this will was made 7 November, 1627, in which are mentioned various other grandchildren (including Robert, son of John Pemberton).
Skynner, 117.

Her daughter Catherine died in 8 years later in 1628.

His wife Alice lived another 14 years after his passing. 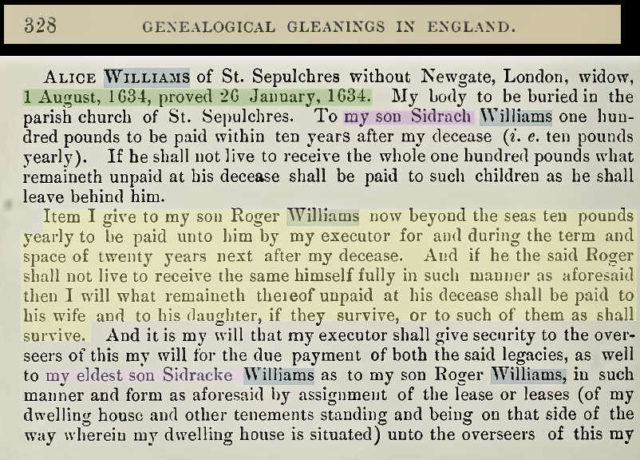 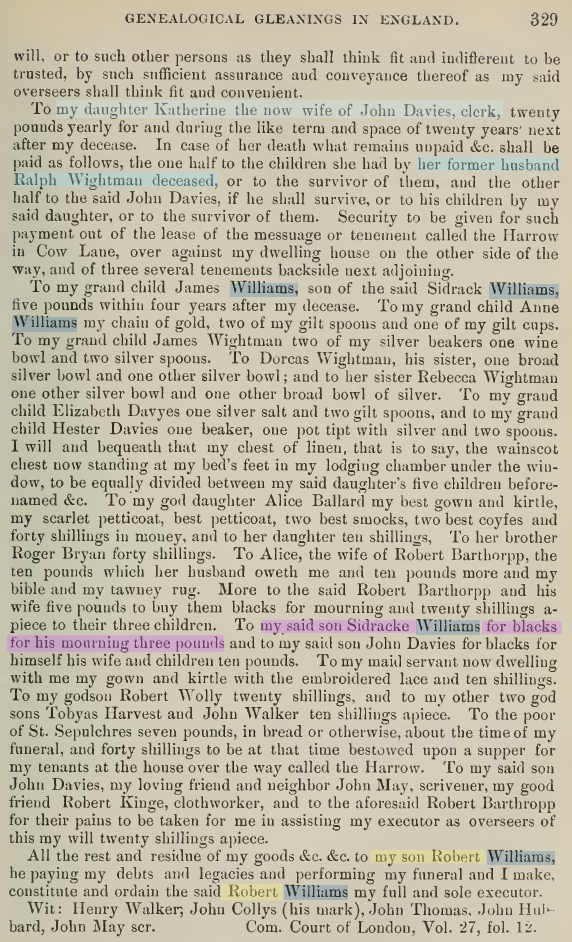