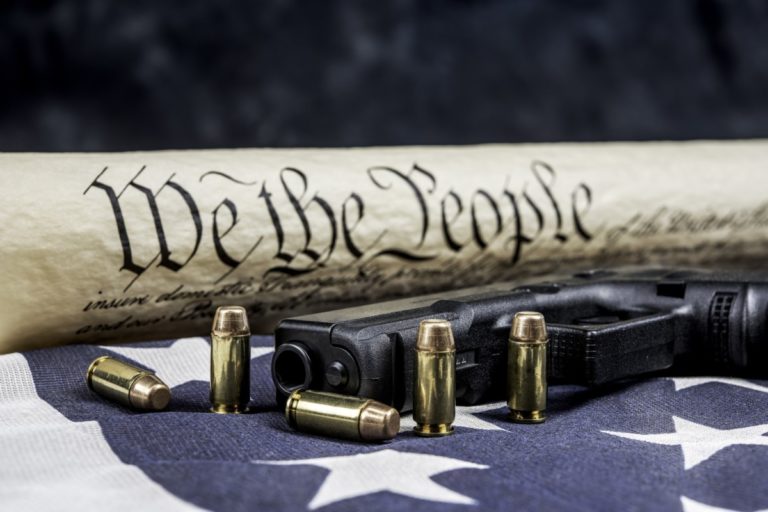 One of the ideas floating about is a National Gun Licensing Program. And, I think it’s worth discussing. After all, we made flying safe, we can make gun ownership safer in America. I think we can have our cake and eat it too. Meaning, we can make sure good people own as many guns as they want, and keep them out of the bad guys hands.

There are lots of good ideas out there. Clinton’s Federal AWB regulations are worth discussing. Why did mass shootings increase dramatically when it expired in 2004?

If we can do all that, we definitely can do more than we are currently doing.

Understanding Both Sides of the 2nd Amendment Debate

First, my viewpoint just so you know where I stand. I own 4 guns myself. I support allowing the government to freely collect gun data, the gun licensing idea, making it easier to take guns from bad guys, and serial numbers on ammo. I prefer a comprehensive bill, but let’s pass clean bills too. No one is arguing that one specific law would prevent all crime.

For those that say no law or change in society will prevent gun violence, read my article Idea: Comprehensive Gun Control which is a reasonable list of items I support.

This could be a minimum based law. Meaning states would agree to these Federal minimums through our usual congressional process, but would retain their right to pass stricter gun laws.

The idea I support the most is the gun licensing idea. Specifically, a National Gun Card.

I personally like the idea of a National Gun Card which facilitates gun ownership and responsibility.

Each level would define what types and how many guns you are allowed to buy, carry, and transport. Also tied to what ammo you can buy, as well as how and where you store ammo. This would help with the “well regulated” part of the Second Amendment.

Imagine casual gun owners owning 1 or 2 guns just like now. But, hobbyist and enthusiasts level-up with additional training and go for the higher levels. Those that go nuts for guns go for even more. The bragging rights, but we have control. Sure, the gun makers will lose a little money on gun sales, but imagine the industry around gun safety, personal safety, active shooter training.

The rights of each level could be something like:

As part of the well-regulated civil right, you start with no ability to purchase a gun, nor ammo. To inherit a gun, will be super easy and free. Just sign up at your local gun shop who will then have the opportunity to upsell you. Go capitalism!

For hunting, the regulations in place will be rolled into this regulation, or kept separate. To be clear, to buy a hunting gun, you have to get a level-1 ID.

Level 0: No ability to purchase a gun, nor ammo. Free to inherit or be given a gun.

Level-1: Recreational and Hunting Use.

Buy up to 4 guns (handguns and/or long guns), and store up to 400 rounds of ammo. Limited to 10 bullet clips. Plus, you can buy a reasonable amount of ammo with a simple background check, even at gun shows. Because these guns are for recreational use and not self-defense, you have to keep them unloaded in a gun safe.

Gun racks in pickup trucks have to be unloaded and locked with at least a simple lock. [need to define simple lock]

Requirements: Over 25 requires a 10-day waiting period, over 21 a 30-day waiting period. Under 21 would have to go through some minimal testing and training. Under 18 also need permission from their parents (or we ban under 18); otherwise, not tests, no training required.

Convicted felons have to get a waiver from a court. Court’s could allow all non-violent felons to qualify, some violent felons, but only under certain conditions. Although the judge would have the power to overrule, especially if you’ve ever used a gun in a crime. So the controversial “Use a gun, go to jail,” slogan now becomes the valid, “Use a gun, lose your rights.” Getting your gun rights back after you have committed a violent crime with a gun should be nearly impossible. If you use a gun in a non-violent crime, and hurt no-one, it should still be very difficult to get your gun rights back, but judge’s discretion.

Why age 25? Studies indicate the human brain does not finish developing until around age 25. If, as a society, we want to raise all or some of the 18 and 21 year-old regulations to 25, I’d be okay with that, but careful deliberation is needed on each regulation.

Finally, with level-1, we can debate regulations that have made other countries much safer from gun violence, and try out the successful one. For example, ex-wives in Canada can prevent an ex from purchasing a gun. Japan requires a statement of support from a close relative.

Level-1 plus you can keep your guns loaded anywhere in your home that is safe. Meaning, if you have kids in the house, it must be in a gun safe, or equivalent. For example, if there is no-one under 18 in the house, you can have the gun loaded under your pillow. Like level-1, level-2 assumes the individual will take responsibility for gun safety at all times. This concept is similar to dog ownership. If you choose to own a dog, it is your responsibility to keep it on a leash while walking it. If you choose to not use a leash, and it kills a cat, you are liable for your dog killing a cat.

Requirement: After an additional 30 days at level-1, you can apply for level-2. Because 1+ guns are for personal safety, you have to go through 1-time active shooter training.

Or, sign a waiver anytime to qualify for level-2. The waiver is intended for those that believe they are in eminent danger. Perhaps the waiver can be signed off at any police station so the police are aware of the danger you think you are in and can give additional advice. The regulation would define “eminent danger” and the police would apply an Eminent Danger Test, which, if we want, could include “a feeling” at the federal level and then allow individual states to implement stricter qualifications, or we can define the Eminent Danger Test in the regulation similar to the immigration Credible Fear Test applied by border patrol.

Level-2 but instead of 4 guns, you can have unlimited guns plus you can store 1,000 rounds of ammo. Intended for the gun enthusiast

Level 3: Same as level 2, but unlimited guns and ammo for category.

Level-3 plus you can own, use, and transport an AR15 like semi-automatic. Can be used at home, or on gun ranges only. Must be transported in a locked case.

Level-4 plus you can open carry in any area that the state has not prohibited. In non-open carry areas, must be transported in a locked case.

Level-5 plus fully automatic weapons in any area that the state has not prohibited. In non-open carry areas, must be transported in a locked case.

Requires Level-1 or above. Local police waiver. Intended for the hobbyist who likes to make his own bullets. Current regulations would cover making the making of retail bullets.

Requires Level-1 or above. Easy to get. Intended for the enthusiast who shoots more frequently. I support same day ammo available at gun ranges so those that own a gun can go to the range and practice as much as they want. This add-on is primarily for those that want to buy in bulk.

Unlimited ammo. Intended for extreme enthusiasts and those preparing for a catastrophe where a large stockpile of guns and ammunition is desired.

Requirement: Requires Level-4 or above plus TBD.

Requires Level-2 or above card. Similar to regulations now. Perhaps we want additional safety training, or leave that decision up to each state.

Requires Level-2 or above card. Similar to regulations now. Perhaps we want additional safety training, or leave that decision up to each state.

Allows you to collect regulated guns as you can now such as a tank with disabled munitions, a cannon but not the ammo, gatling gun but no ammo, etc. Very similar to collector regulations now, just bundled into this add-on to make regulating them easier.

Allows you to purchase and own large capacity magazines.

Requirement: Level-3 or above plus TBD.

Enforcement details can be worked out, but something like the following could work.

Gun Enforcement: Too many guns or wrong type would be immediately confiscated by local police and held for one year. If not released back, guns are destroyed after one year. The guns can be released back to the owner once the proper level Gun ID is earned. If not possible, guns can be sold to someone with the qualified Gun ID, both individuals show up with ID, and perform the transaction in front of any police officer.

Also, we need to make it easier to take guns from bad guys. Relatives and neighbors in many of these shootings reported questionable behavior. Authorities were called, but because the NRA and Republicans are so law-suite trigger-happy, they did not take their guns. The mom of the Thousand Oaks killer of 12 called authorities twice within months prior to his rampage. They even called in a mental health authority. We need to fix this. We’ll give them an appeal process, but we need to make it super easy to take guns away from the bad guys.

I also support requiring serial numbers on ammo. Most crimes are committed in a time of passion. If you know your ammo is marked, you might think twice. If you are too upset to think about that, well, then the crime is easier to solve for law enforcement. We will need a special carve out for making ammo, perhaps tied to the National Gun ID Card I support. Some hobbyists like to make their own ammo.

We already have much of this, but because of no cooperation from the NRA, we can’t enhance it to the point of making sense, and making EVERYONE happy. Hobbyists want to be able to go into a gun shop and buy an AR15 or a shot gun while on vacation so they can go shoot. Well, if they have the proper “clearance”, fine. If not, no. This is not hard!

What do you think?

Do you like the idea? If so, what would you tweak about the levels? If not, why? Do you have another idea?

One Law Will Not Prevent All Gun Violence

Although owning a gun is a civil right, all civil rights come with responsibility. We have a problem with gun violence in America that no other country has. I think this problem is because the gun community currently rejects the individual responsibility that comes with this civil right. Let me give you an example related to free speech. Although we have a free speech civil right, you cannot use free speech to cause harm on another. Gun rights are limited by gun regulations, and we as a society can limit guns in many ways. We pass laws at the city, state, or federal level, then if any one person has a problem with the regulation, the courts decide based on the constitution. There are many regulations throughout American life that limit what you can do, require training, passing tests, etc.