One of my favorite family stories is Roger Williams, my 10th Great Grandpa! This article documents the important details that link each generation to the next.

Who Was Roger Williams?

Roger Williams is pretty famous and accomplished much in his lifetime. He is arguably the founder of modern American society, the first American abolitionist, and co-founder of liberalism.

For more on Roger Williams, read my summary:

My Ancestors Back to Roger Williams

The following chart shows my family back to Isabella Baxter. Copies of the pictures of Edwin Lowe, Sr. and Isabella Baxter were given to me by my cousin Colleen Cunningham in 2018.

The following family photo was taken in 1925. My great-grandpa Richard Henry Lowe was the 4th of 7 children born to Isabella Baxter.

Because of a state census, we know a bit about the Lowe-Wright family at this time. This is a good example of the type of documentation that can exist for your ancestors. The 1925 Iowa state census collected some interesting information. In addition to the usual data, on this census is the name of your father (not just state born), and maiden name of mother, education levels, religion, and more. Our family was lucky in that they participated in the census in Bethel, moved to Vernon and participated again. This census clearly documents that Isabella Baxter of Providence, Rhode Island is Richard Henry Lowe’s mother.

In the following descendant chart, the Baxter name is highlighted in yellow. Isabella Baxter was the last of my ancestors born in Providence. David Baxter Lowe and Baxter Culver were likely named after her. But, Baxter Culver believes his parents named him after the family Pastor named Baxter. Perhaps both? 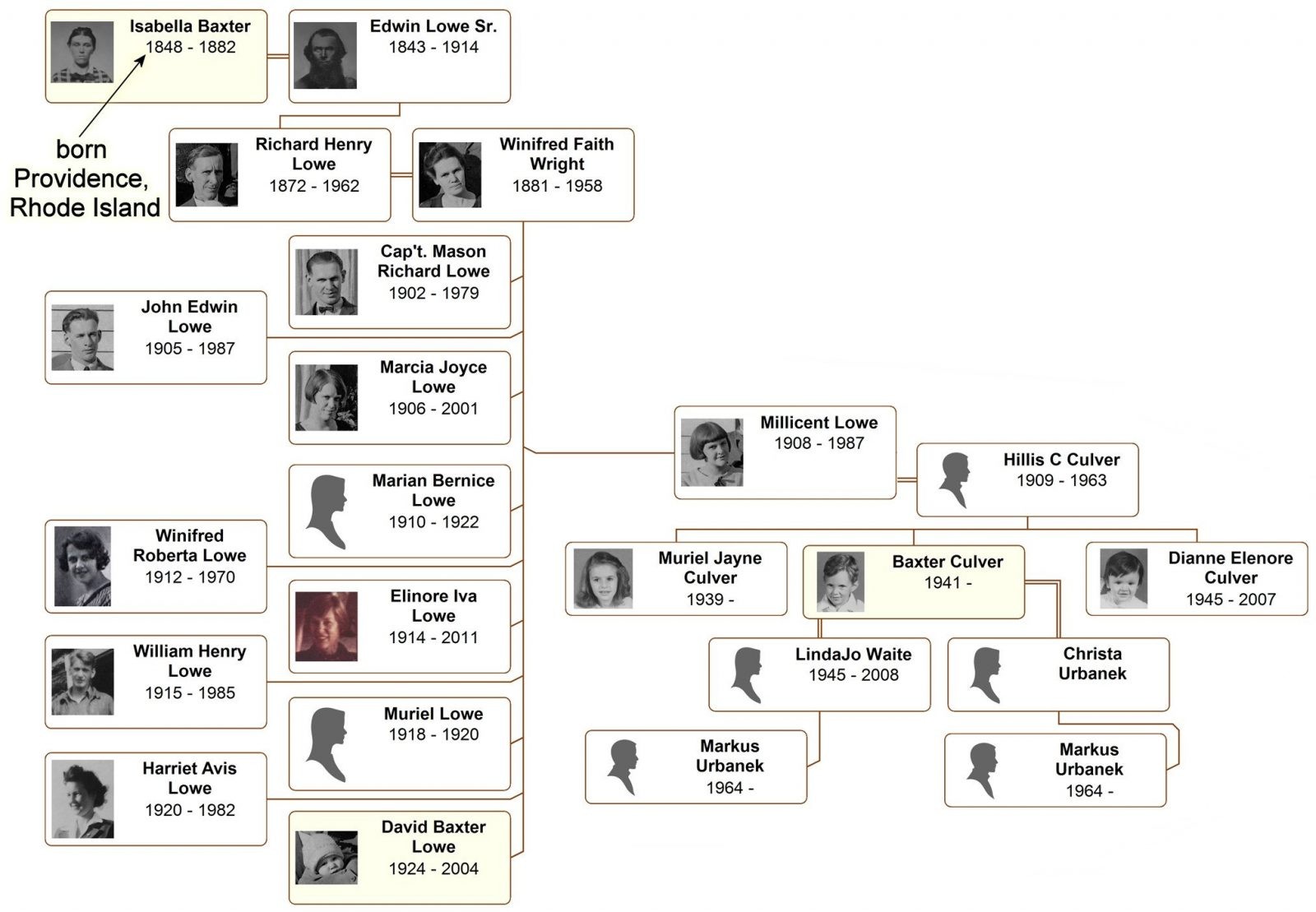 Isabella “Belle” Baxter was born in Providence on Sunday, January 9, 1848. Isabel and her sister Adelaide were twins! They were born where her ancestors on the Olney-Potter-Sayles-Williams side founded Providence, Rhode Island in 1639. Two plus centuries of the family lived and flourished in Rhode Island.

Isabella married my great-great-grandpa Edwin Lowe, Sr. Edwin was born in England and in 1856 at the age of 13, his family immigrated to Iowa. Isabella and Edwin married in Providence on Tuesday, July 3, 1866. Edwin and Isabella had their first child Cora the next year in 1867. About 1878 they moved to Iowa, and in 1878 Isabella was baptized a member of the Reorganized Church of Jesus Christ of Latter-Day Saints at Blue Cut, Jones, Iowa, by Edward Larky. She was confirmed by W. W. Blair and E. Larky.

Edwin and Isabelle had 7 children, of whom 5 reached adulthood. She died 8 days after giving birth to her 7th child Edwin, Jr. after 8 days of intermittent fever. Isabella reached age 34 years, 8 months, and 3 days. Her death took place in Baldwin, Iowa at 5 a.m. on July 12, 1882. She was buried the next day in Canton. Edwin married Alice Abbie 3 years later and had 1 more child: Anna Lowe was born in Iowa about 1890. 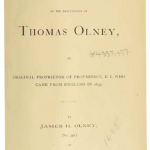 The book A Genealogy of the Descendants of Thomas Olney by James H. Olney was published in 1889. Thomas Olney was an original proprietor of Providence, R.I. who came to America in 1635. This book was the first source I found documenting our direct-line ancestors to Catherine Sayles. I’ve spent the last several years auditing and validating the data back to Roger Williams. The more I look, the more I’m convinced I have the lineage correct.

This 1889 book documents the following lineage:

Plus, Abigail’ from above (first cousins):

All of the people in the following pedigree chart except those highlighted in blue are documented in the book, A Genealogy of the Descendants of Thomas Olney, published in 1889. In addition, my mom Leslie has DNA matches to Hannah Olney, Jabez Olney+Hannah Pitcher. Also, I have DNA matches from me back to Caroline Potter’s parents, and Hannah Pitcher’s parents. So, the family is very confident going back to Jabez Olney (1761-1837). Let’s audit, validate, and explore!

Note: The drawings of Thomas Olney and Roger Williams are accepted images of them. However, both were drawn after their deaths and are only an artist’s representation based on descriptions.

When Hannah Olney was born on December 3, 1815, in Rhode Island, her father, Elisha, was 20, and her mother, Caroline, was 17. Hannah was their first child. She married Josiah Baxter who was born in 1806 in Massachusetts. They had four sons and three daughters between 1839 and 1853. They raised their 7 children in Providence. The twins including Isabella Baxter were the 5th and 6th children.

Josiah was a cabinet maker and a plow maker at various times over about 30 years. I wonder if any of his cabinets or plows are still around?  Hannah reached 67 years of age and died on May 6, 1883. Josiah died sometime after 1883.

The 1860 census is a good example of the Josiah Baxter and Hannah Olney family because the parents and all 7 children are listed.

The following book entry is important because it links my 2nd Great Grandmother to the 1889 Olney family book which links reliable back to Thomas Olney, an original member of the First Baptist Church, and William Rogers.

Jabez Olney was born, lived and died in Providence, RI. Jabez’s parents are Gideon Olney and Abigail Olney. Gideon and Abigail are first cousins. Their fathers are brothers which means instead of having 4 different sets of grandparents, they both only had 3 different sets. Both their dad’s parents were William Olney and Catherine Sayles.

Jabez married Hannah Pitcher and had 7 kids including my ancestor Elisha. 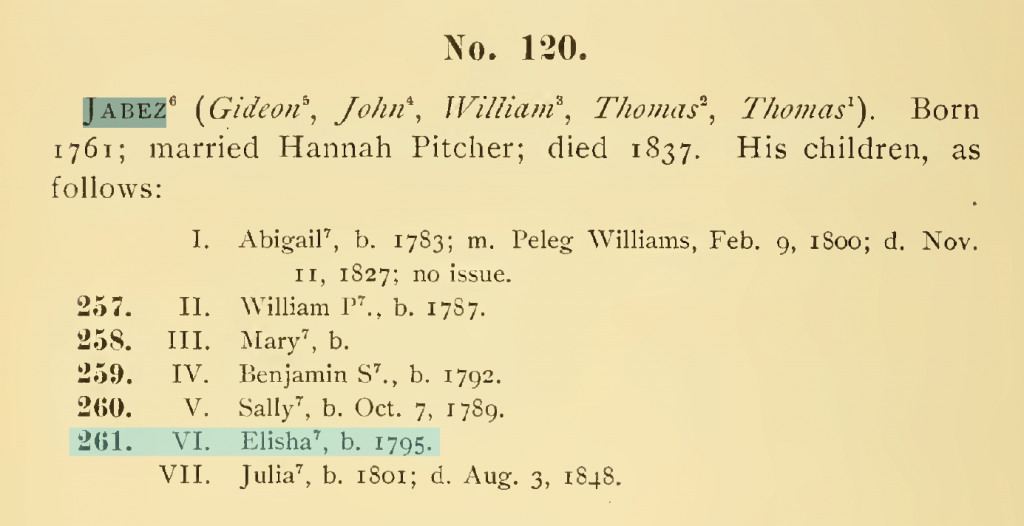 Jabez was a Corporal in the American Revolutionary War. He reported to Captain Lewis Peck’s Company. His colonel was John Mathewson.

He died on September 5, 1837, having lived a long life of 76 years, and was buried in Providence, Rhode Island.

Gideon married his first cousin Abigail about 1747. They had ten children in 20 years. Their fathers were brothers. In the past, fewer people lived near each other, and travel was more difficult so it was fairly common for 1st cousins to marry. They had a farm on the road leading to Fruit Hill, North Providence, RI.

Gideon was the representative from Tiverton in the General Assembly of 1776. He died on February 3, 1798, in North Providence, Rhode Island, at the age of 68. I’m still researching Abigail’s death date.

When William Olney was born on October 6, 1694, in Smithfield, Rhode Island, his father, William, was 31 and his mother, Catherine Sayles, was 23. William married Phebe Angell in 1716 in Rhode Island. They had seven children in 12 years. William died on April 20, 1771, in Providence, Rhode Island, having lived a long life of 76 years.

The brothers William and John were two of the sons of William Olney and Catherine Sayles. William had a daughter Abigail, and John had a son Gideon. Gideon and Abigail, first cousins, married (documented above). All of whom are our direct ancestors. Both brothers were born and lived their whole lives in Providence. 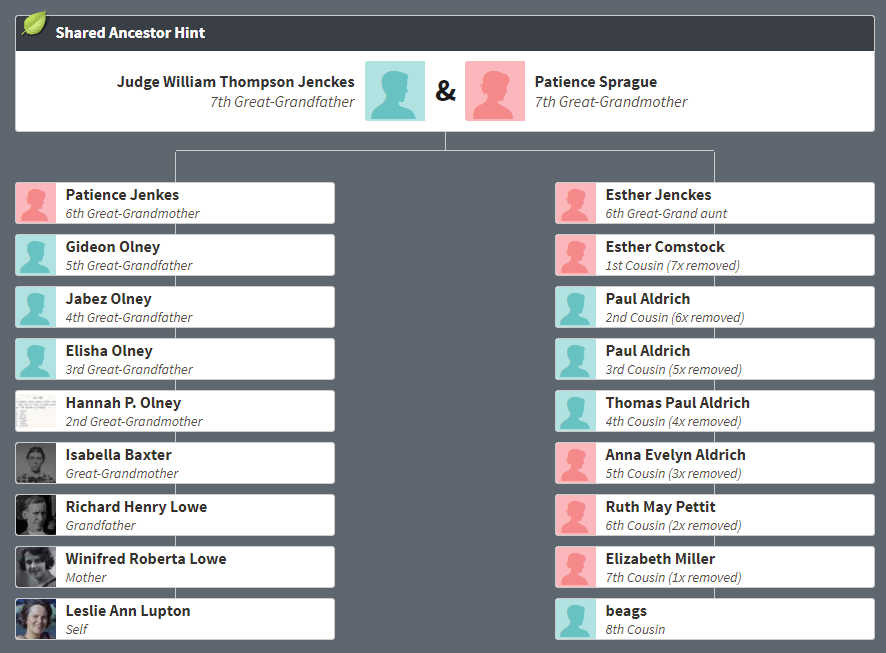 Catherine is the daughter of John Sayles II and Mary Williams. When Catherine Sayles and her twin sister Eleanor were born in 1671 in Providence, Rhode Island, their father, John Sayles Jr and their mother Mary Williams were 38. They were young children at the time of the King Philip’s War between settlers and Native tribes that lasted three years from 1675-1678. Their grandpa Roger Williams played a key role in the conflict.

She married William Olney on December 28, 1692, in her hometown. They had seven children in 19 years.

She died on February 21, 1753, in Providence, Rhode Island, having lived a long life of 82 years, and was buried there.

More documentation, this one from a 1966 book:

This clip shows John Sayles III, the brother of Catherine documented as the grandson of Roger Williams in town records.

Mary is the daughter of Roger Williams and Mary Bernard, their firstborn. Mary was born the first week of Aug 1633. She married John Sayles Jr in 1652. She was 48 when she died in 1681 which means she died after 7 Aug in 1681. At the time of her death, her mother had passed but Roger Williams lived about another 2 years.

Mary Williams’ husband was John Sayles Jr. He was the son of John Sayles, Sr. of Manchester, England. His father brought him to America in 1635 at the age of two. They first settled in Portsmouth, RI, and moved to Providence about 1650. In 1653 he was treasurer of the Assembly which met at Providence, May 16. In 1656 he ‘entered an anker of liquor.’ The same year he assisted Thomas Angell in rescuing a prisoner from the custody of a Massachusetts officer. In 1657 he was empowered ‘to treat with the Indians that lay claim to the meadows of Lohusqussuck and clear it for the town and the above mentioned be accommodated therein.’ In 1677 he was fined twenty shillings for not attending grand jury. During the thirty years or thereabouts, from the time of his marriage till his death, he was at different times commissioner, town clerk, town treasurer, warden, grand juror, a member of the town council, and he was twelve times chosen assistant or deputy.

Mary’s husband John Sayles also died in 1861. Both were young, Mary was 48 years old, John about the same. We know Mary was born in the first week of August 1633 and died on August 8, 1681, just a few days after her 48th birthday. I’m still researching John’s exact birth and death dates and why both died so young.

I am proud that Roger Williams is my 10th Great Grandpa. My family has always been free thinkers supporting progressive ideas that enable the individual to think and believe what they want and are encouraged to explore life.

1 thought on “Research: Our Family Connection to Roger Williams”

The American Tradition of Separation of Church and State
March 10, 2019

Roger Williams Biography and Dedication to the Freedom of Conscience
February 17, 2019