Don Trump, Jr. deleted his racist tweet fixing a mistake which s is part of being human. However, if Trump supporters are tired of being called racists, then just stop being racist! This isn't hard. 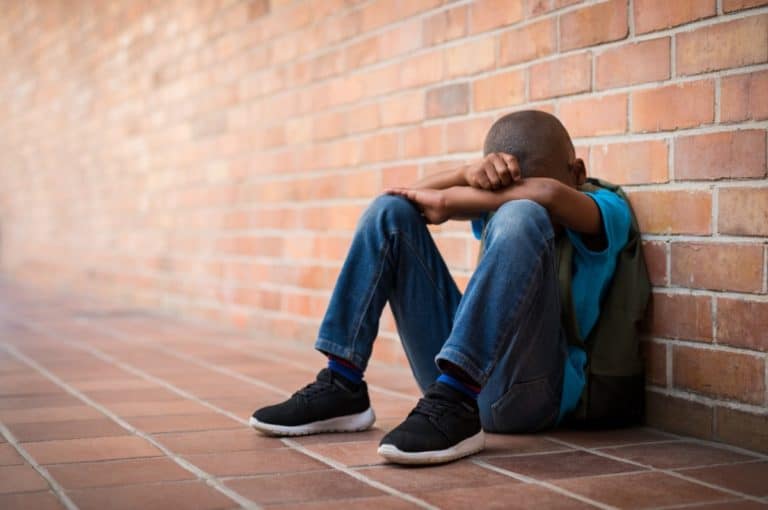 Racism starts with hate and division. With us vs them.

This colorized image of a teenager brought to life the racism of Nazis a bit more than the b&w version. The colorized image shows her fear and strength in the face of racism and extermination. She was murdered by racists and their compliant supporters a few months after this photo.

Trump and the Rise of Racism in America

The image above is a pertinent image these days because of Trump and his ignorant supporters. Before America goes too far down the road of us vs them, of hate, of racism, many of us are waving warning flags.

In the 1930s Germany was affluent just like America is now. Like the boiling frog, Nazis lead their supporters into deeper and deeper heinous acts ending with the murdering of 6 million men, women, children, daughters, sons, aunts, uncles, etc.
Yes, I don’t “think” this can happen in America. The exact same thought most in Germany thought in the 1930s. The murdering of 6 million people started with hate and division. Exactly what is going on now in America. Compliant Trump supporters are pushing us down this road and I just want to make sure we don’t go down this road too far.
First, it’s Trump has no relationship with Russia, no business dealings, and no one in the Trump campaign communicated with Russia at all. We ended up knowing the Trump campaign conspired against America with Russia, had more than 150 contacts, and Trump was pursuing business deals. However, Trump supporters do not believe these facts. They were led down the heinous road one step at a time. Just like the boiling frog.
The exact same thing is going on with Trump and racism. One degree at a time, he’s boiling the kettle of racism right here in America. Those of us that can see this are concerned about the ignorant.

What I like about Democrats is that we tend to treat all terrorists the same. Condemnation with a hint of trying to understand why they are doing these crimes and an eye toward exploring what we can do about those crimes.

Lie: Racism is not on the rise, just Democratic talk of it.

I do find it interesting that Trump supporters and conservatives repeat the Trump lie that racism is not on the rise, and that the only place racism is on the rise is in Democratic talking points.

Here is an article from the Brookings Institute with links to statistics. If you believe this lie over this data, then we’ll just have to agree to disagree.

Trump and racism: What do the data say?

On Saturday, August 17, 2019 Trump attempted to distract using fear of Antifa. Trump LITERALLY tweeted that he is personally pushing to have Antifa designated a terrorist group.

Major consideration is being given to naming ANTIFA an “ORGANIZATION OF TERROR.” Portland is being watched very closely. Hopefully the Mayor will be able to properly do his job!

Just to be clear, this is a distraction based on fear with no relation to reality.
I’m not a big fan of Antifa, but the FACT is that ZERO PEOPLE in the entire history of the world have died at the hands of Antifa. ZERO!!! Antifa is an anti-hate, anti-racism, anti-fascism protest group.
How many millions have died at the hands of White Nationalists, the KKK, Islamic terrorists, Nazis, Neo-Nazis, and other hate groups? If you fear Antifa, you really need to take a look at your own values.

A Clear Example of Machiavellian Tactics

Trump, White Nationalists, and the far-right are trying to divide us. Some, like Trump, hope to win an election. Others hope to continue the work of Charles Manson and start a race war. For those just trying to win an election, remember, the ends do not justify the means despite Machiavelli’s arguments for it in his book “The Prince”. For most, the counter-arguments in favor of “the ends DO NOT justify the means” destroy Machiavelli’s arguments.
Today Trump continues to define the 2020 Election as racists vs humanity. I’m on team humanity.

For the record, the fact that Don Trump, Jr. deleted his RACIST tweet is good. Fixing mistakes is part of being human. However, if Trump supporters are tired of being called racists, then just stop being racist! This isn’t hard. Even in his clean up, Don Trump, Jr.s press secretary said he was just asking the question. hmmm…yes…just asking a racist question. Wow. How dumb are Trump supporters? Maybe not all, maybe just racist. At this point, most of us understand the Republican party stands for the amplification of racism in America. That’s reality. That’s the truth. 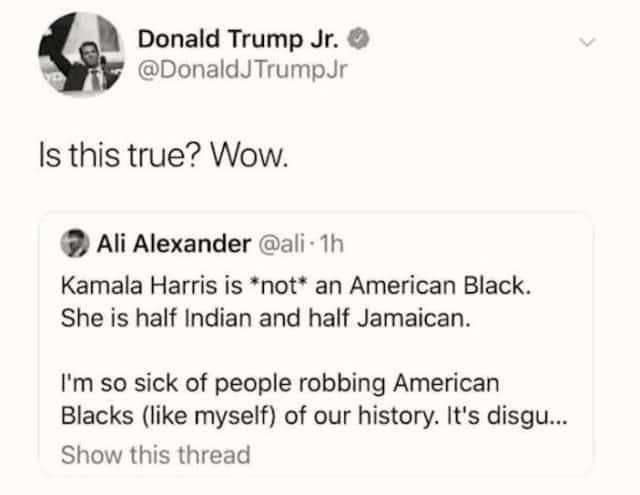